A new formula for oral rehydration salts (ORS), has been released by the World Health Organization. The new formula ORS, a sodium and glucose solution. is widely used to treat children with acute diarrhoea. Since WHO adopted ORS in 1978 as its primary tool to fight diarrhoea, the mortality rate for children suffering from acute diarrhoea has fallen from 5 million to 1.3 million deaths annually.

The new improved formula is the result of extensive research sponsored by WHO’s Department of Child and Adolescent Health and Development and supported by the United States Agency for International Development (USAID). The latest study was conducted in five developing countries among children from one month to two years old with acute diarrhoea and dehydration.

The study’s findings suggest that using the low-sodium, low-glucose ORS formulation reduces the need for intravenous fluids by 33 percent. The effect of this reduction could result in fewer children requiring hospitalization, fewer secondary infections, a diminished need to handle blood with its potentially dangerous consequences, and lower health care costs.

For more than 25 years, WHO and UNICEF have recommended a single formulation of glucose-based oral rehydration salts to prevent or treat dehydration from diarrhea irrespective of the cause or age group affected. This product, which provides a solution containing 90 mEq/l of sodium with a total osmolarity of 311 mOsm/l, has proven effective and without apparent adverse effects in worldwide use. It has contributed substantially to the dramatic global reduction in mortality from diarrheal disease during the period.

For the past 20 years, numerous studies have been undertaken to develop an “improved” ORS. The goal was a product that would be at least as safe and effective as standard ORS for preventing or treating dehydration from all types of diarrhea but which, in addition, would reduce stool output or have other important clinical benefits. One approach has consisted in reducing the osmolarity of ORS solution to avoid possible adverse effects of hypertonicity on net fluid absorption. This was done by reducing the solution’s glucose and salt (NaCl) concentrations.

Studies to evaluate this approach were reviewed at a consultative technical meeting held in New York (USA) in July 2001, and technical recommendations were made to WHO and UNICEF on the efficacy and safety of reduced osmolarity ORS in children with acute non-cholera diarrhea, and in adults and children with cholera.

These studies showed that the efficacy of ORS solution for treatment of children with acute non-cholera diarrhea is improved by reducing its sodium concentration to 75 mEq/l, its glucose concentration to 75 mmol/l, and its total osmolarity to 245 mOsm/l. The need for unscheduled supplemental IV therapy in children given this solution was reduced by 33%. In a combined analysis of this study and studies with other reduced osmolarity ORS solutions (osmolarity 210-268 mOsm/l, sodium 50-75 mEq/l) stool output was also reduced by about 20% and the incidence of vomiting by about 30%. The 245 mOsm/l solution also appeared to be as safe and at least as effective as standard ORS for use in children with cholera.

The reduced osmolarity ORS containing 75 mEq/l sodium, 75 mmol/l glucose (total osmolarity of 245 mOsm/l) is as effective as standard ORS in adults with cholera. However, it is associated with an increased incidence of transient, asymptomatic hyponatraemia. This reduced osmolarity ORS may be used in place of standard ORS for treating adults with cholera, but careful monitoring is advised to better assess the risk, if any, of symptomatic hyponatraemia.

Because of the improved effectiveness of reduced osmolarity ORS solution, especially for children with acute, non-cholera diarrhea, WHO and UNICEF now recommend that countries use and manufacture the following formulation in place of the previously recommended ORS solution with a total osmolarity of 311 mOsm/l.

Although this single ORS formulation is recommended, WHO and UNICEF have previously published criteria, which remain unchanged, for acceptable ORS formulations. These criteria are listed below; they specify the desired characteristics of the solution after it has been prepared according to the instructions on the packet:

The total substance concentration (including that contributed by glucose) should be within the range of 200-310 mmol/l. 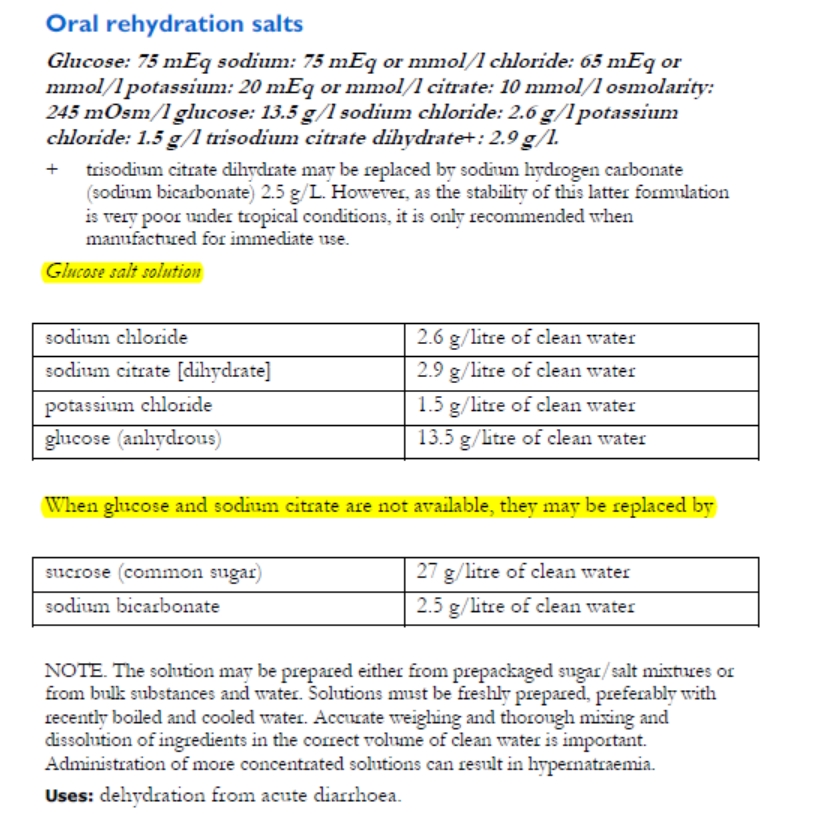 WHO Document 2006 with annotations by Dr. Cheikin